Searching for Our Better Selves

For those who lost their lives,

those who suffered unspeakable loss,

and those who were forever changed.

In this sacred garden, I walk among the pines, saplings not long ago. I look toward the Journal Record building and realize it was long ago, twenty-one years ago. For residents of central Oklahoma however, the memory is still fresh. Those who stood exactly where I am standing on April 19th at 9:01 that morning back in 1995 cannot walk among the pines. 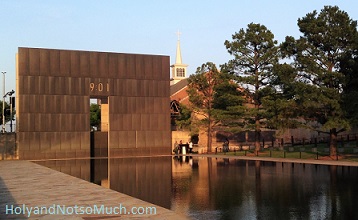 I had been on vacation and was on my way back home to Oklahoma City. It was a romantic getaway to Key West Florida at a picturesque bed and breakfast, with peaceful beaches, fresh seafood, fancy concoctions of dark rum, pineapple, and coconut, and badly needed relaxation.

While we waited to board the plane in Miami for our trip back I glanced up at the television monitor, same old same old. Some insurgent had bombed yet another spot in the Middle East. But then, I saw my friend Larque on the screen, standing on the steps of the Journal Record building with blood on her head and face. I had just seen her a week ago Wednesday morning in her office at the Journal Record. This could not be Oklahoma City! OKC was in the heart of the country, farming and ranching country, regular folks, nothing like that could possibly happen at home. But it did. 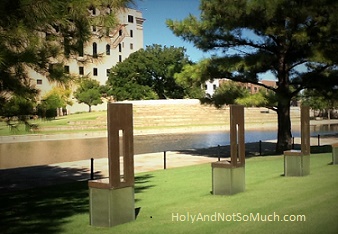 The vacation was a long time coming after a trying year. I sustained a serious back injury working for McGraw-Hill Publishing and had excruciating pain for months. Just learning to live with Lupus, I changed jobs, as I could no longer perform the physically demanding tasks. My emotions were raw at the time, right at the surface. I cried frequently. Vicodin and the fatigue of long-term pain have that effect on you. That day in the airport, I had no idea the tears had just begun.

We tried to reach anyone we could in Oklahoma City (before cell phones). All lines were busy. We had no idea if the bombing was a singular incident or widespread; we were worried about family and friends.

I finally spoke to Dad who reported that it seemed to be a singular act. He had just watched a news update on the destruction and saw his friend, wearing a bright rust-colored jacket, crawling out of the rubble down an extended firetruck ladder. Dr. Brian Epps was a Veterinarian who worked in the Federal building for the Department of Agriculture at the time. Another Veterinarian, Dr. Margaret Clark, who also worked there, stopped by her office for last-minute business when the bomb went off and was killed.

Just recently I saw that same footage with Dr. Epps in the rust-colored jacket, a stark contrast to the dust, rebar and cement he crawled out of. Over the years, this is one of the images of that day that has come to symbolize the horror of the bombing. 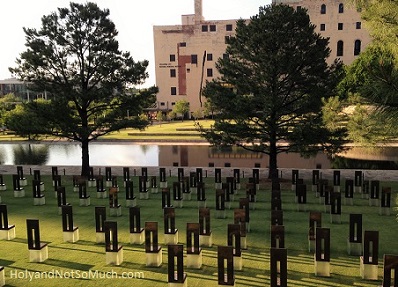 A couple days after we were home the story came together. A terrorist. A veteran. One of our own. Timothy McVeigh was a former soldier bent on revenge against the Federal Government for the siege against the Branch Davidian compound attack in Waco Texas two years earlier.

The bombing of the Alfred P. Murrah Federal building in Oklahoma City left 168 people dead, 19 of them children, 700 injured, half of the Federal Building gone, 324 buildings damaged or destroyed, glass shattered in over 250 buildings, 86 cars burned, and $652 million dollars in damage. The surrounding area looked like a war zone. Thousands of families would never be the same, lives were stopped, catastrophically altered, changed forever.

For two weeks the entire city came to a standstill. Regular programming was suspended on television, work-place televisions were on everywhere, tuned only to continuous coverage. We all watched, wept and prayed more victims would be uncovered and rescued from the Murrah building. 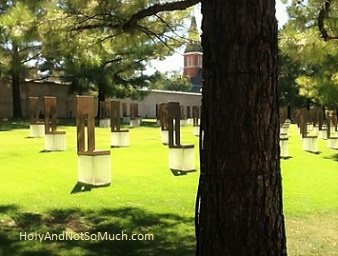 Anxious families held on to hope their loved ones would be found alive in the ruins, few were. It was grueling, day after day. The man I was dating at the time lost his niece in the bombing. She worked as an interpreter for the Social Security administration, just twenty-four years old. 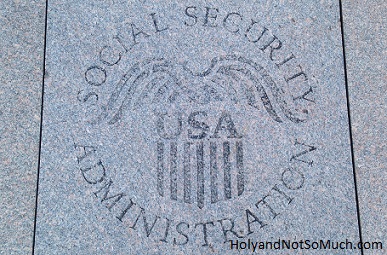 We were changed, our innocence was taken. I recall approaching each day with less certainty. When I met a stranger I wondered if they were somehow involved in the bombing. It took a long time to feel safe again.

It was not only those of us from central Oklahoma who changed, the nation changed. Acts of terror became more frequent after this, but this remains the worst act of domestic terrorism in the United States. One of our own committed this act; it shook the country to the core. This was something violent from the extreme right.

Security was increased at government facilities across the nation, which continues today.  Airports that formerly allowed parking next to the building, now require off-site parking, many buildings are now built set back from street access. 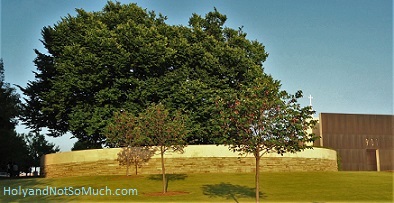 As I walk the Memorial grounds today I gaze up at the Survivor Tree which has come to symbolize resilience for us; it holds a place of prominence in the garden. I remember the words of one of the children who survived the falling debris by running as quickly as he could away from the building. He quizzed a reporter, “We ran away in about seven seconds. Do you know how long seven seconds is?”

As I approach the Survivor Tree I am astounded; it has doubled in size since I saw it last. The more than 100-year-old American Elm was badly damaged when the 4800-pound bomb went off, branches ripped off by the blast and glass and debris embedded in it. The investigators further damaged it retrieving evidence.

There was such a public outcry for this tree to be spared that a state of the art irrigation system was constructed under the promontory where the tree stands and it was slowly restored. Cuttings of the Survivor tree have been grown in nurseries all over Oklahoma  Each anniversary of the bombing saplings of the Survivor Tree are distributed. 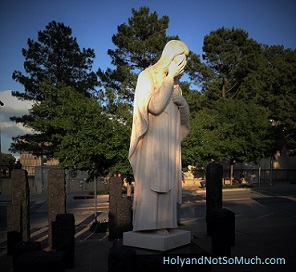 How do we move forward even now? How do we restore reason? A few years ago the young child of my dear friend Monica said it best. Her parents took her to visit the memorial. While standing by the fence lined with memorabilia in honor of the victims, they told her the story. After, she asked, “What happened to that bad man?” They told her officials put him to sleep. Upon hearing this she replied, “Maybe he’ll be in a better mood when he wakes up!”

Her reply is both humorous and prophetic. While we understood the shock at how the situation in Waco unfolded, and were saddened those people died so violently, McVeigh’s response of violence was so counter to reason, so callous, merciless. Take a look at our world many years later. Don’t we all need to wake up and check our moods?

The current election is an opportunity to do just that. From the fisticuffs at political rallies to the vitriol spewed on social media, just another form of hate. And—let’s not throw stones here. Many of us have done it. It is past time to exercise reason. My own knee-jerk behavior can be so reactionary, so sad and short-sighted.

Our gut is our best guide; it is always correct. The gut is God’s reasonable voice and our better selves.

“Intuition is a spiritual faculty and does not explain, but simply points the way.”