You Gotta Get on the Bus

He couldn’t have weighed much more than his new raincoat.  It was so new, in fact, it wouldn’t let his arms hang the way that they should.  They hung out at his sides at an odd angle, and he could no more scratch his nose than he could turn his head strapped firmly in the hood.  He stood stiff beside the road, and he watched me coming for a long way. 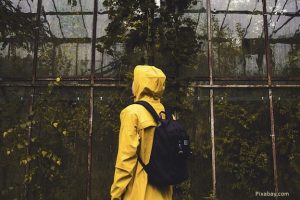 As I passed by him, he looked at me in the strangest way.  His lower lip was curled under his front teeth in fear.  In that passing moment, I wanted to stop and comfort him, but it was called off by the rest of his expression.  When I found him again in my rearview mirror, I saw that it wasn’t me that he had been looking at, at all, but that big yellow school bus that was behind me.  “Oh, that’s right,” I thought, the first day of school.  His eyes were fixed on the bus in such a determined way that I knew he didn’t need any counsel.  Brave as any soldier, he was going to get on that bus for the very first time.

As I drove on, a similar bus, in a similar rain charged out of my memory in similar gear.   I hadn’t been to kindergarten, and that’s what had me worried.  I knew my colors, and I could count past a hundred but couldn’t spell at all.  My mother assured me that I didn’t really need to.  That’s why I was going, and that’s what they were going to teach me, but I wasn’t so sure.  My older sister was way up in the fourth grade, and she could spell like crazy.  She had me convinced that I was a mental defective and that the teachers at our small red brick school would serve me up for lunch the very first day if I didn’t get my act together. 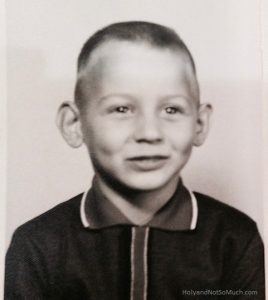 Determined to measure up, I asked my sister what it would take to spell.  Lots of paper and some pencils, she said.  Well, the pencils were covered.  I had already sharpened the life out of the three fat number ones in my Roy Rogers cigar pencil box that lay nearby the big pink eraser, which was well broken in.  Mom had told me the school would give me what I needed, but I couldn’t trust her.  She wasn’t going to school, and my sister, who was, had explicitly mentioned paper.  So I stole a pile of new typing paper from under the kitchen drawer and tucked it in tightly under my bright yellow raincoat.

Standing on Highway 259 across from the mailbox, I was probably about as scared as I ever had been or have been since.  Six years old and functionally illiterate and buckled into a raincoat that I wasn’t sure I could wiggle my way out of without maternal assistance.  About the only things I had going for me was a Roy Rogers cigar pencil box, a new pair of cowboy boots, and about three hundred sheets of stolen typing paper.  The hardest thing I’ve ever done in my life was to step onto that bus.  I’d like to say that all my worrying had been for naught, but it wasn’t. 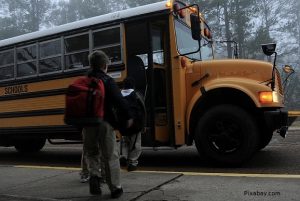 Actually, as I reached this place called George Elementary, my worst fears were realized.  Upon reaching the first-grade classroom, I was greeted by Mrs. Lewis.  I nearly swallowed my tongue as I stumbled on past her into the room.  And it was there that the real trouble started.  All the desks were in neat rows, and each one had a little folded card on it.  “Find the one with your name on it and have a seat, Mark,” I heard her say with a commanding voice from the door.  Other kids I had never seen before were gracefully finding their places and admiring their name cards.  I wasn’t even sure what my name looked like.  I went up and down the aisles until there were only two or three empty seats left.  In seeing what I thought might be an M, I took my best shot and plopped down my Roy Rogers cigar box with great relief into Karen Bowers’ chair. 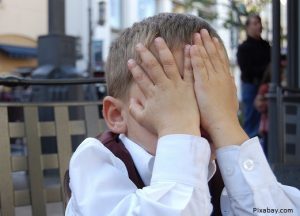 The details are still fuzzy from there, but I think I was found out during roll call.   I vaguely remember Mrs. Lewis looming over my desk and saying something like, “you don’t even know your own name?”  This was the very last thing I needed to be pointed out in front of my very first peer group.  So still in my raincoat, I clumsily got out of my chair, dislodging the three hundred-odd sheets of typing paper that I had precariously perched under my raincoat.  They cascaded across the oak floor in an impressive display and rapidly proceeded to suck up the water that had been tromped in by thirty fist graders.  First graders being how they are about wiping their feet, it’s a good thing that I had brought as much paper as I did.

To say I could have died would have been an understatement.  I blushed so hard my ears rang.  The thing that I remember most about picking up that paper was the presence of that burning bush right behind me in eternal silence, the cruel giggles of my classmates, and the pounding of a broken little heart. 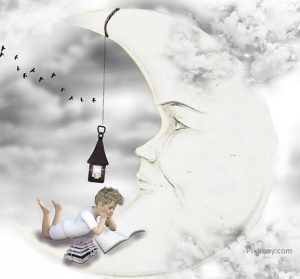 Of course, I lived through all of this and went on to finish my first year of school.  I got used to Mrs. Lewis, even survived getting into trouble on the playground, was never served up for hot lunch, and believe it or not, she even taught me how to spell.  I even got to play Joseph in the Christmas play.  All of these memories came back crystal clear to me as I passed that little guy on the highway.  All of the fears and uncertainties that come with a strange new land.  All of the pain and humiliation that go along with screwing it up and everything we learn in the process.  It never stops and it never seems to get any easier.

I must say how encouraged I was, though, by looking at that small face along the road.  Biting his lip in terror but with pure resolve in his eye, he reminded me all over again of the best lesson I have ever learned.  If you want to go somewhere, you gotta get on the bus.