Death at the Clip & Curl

We were alone, just the incredibly odd man and me. I thought it was the end for me, but what could I do about it? Scream, absolutely. Talk my way out of it, doubtful. Fight, sure, but given my lack of physical prowess, not a viable solution.

It was a day of heavy, jet-lag-meets-the-flu fatigue, arms too heavy to do my hair, much less my job. I pulled into what I shall call the “Clip & Curl” to have someone shampoo and blow-dry my tired hair. A lone stylist was there, a man. I did not think much of it until it was too late. 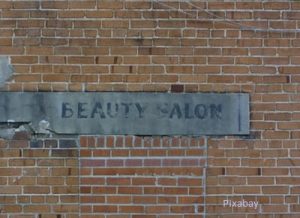 I do not frequent walk-in salons, but I had a chaotic day ahead and needed help, so I went into the no-frills vanilla salon. The only staff member there was a medium-sized man of about forty. I cannot say he greeted me, just soberly showed me back to the shampoo area and prepared me for what I hoped would be a relaxing head massage and speedy hair styling. Straightaway the man was odd.

His movements were exaggeratedly staccato, as was his infrequent speech.  He said absolutely nothing as he yanked a towel around my neck and fastened the shampoo smock so tightly I could scarcely breathe. I reached up and loosened it. He placed another towel under my neck in a heap as I leaned back onto the cold shampoo chair and stared up at the faded fluorescent lights. He is tad rough, I thought. I tried to settle in, wondering if my hair would actually look worse when I left the Clip & Curl.

He brushed my hair roughly and positioned it back into the shampoo bowl with a thud! I was reminded of Mom giving me a ponytail as a kid, pulling my hair back so tightly I looked like a different child. The woman was impervious to certain kinds of pain and thought her children should be too. Impervious to pain and clean, very clean. 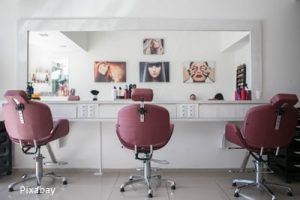 The water was uncomfortably hot, then freezing, hot, then ice cold. I felt a mighty blob of shampoo dumped on top of my head; it felt like enough do three people. He slapped the product on and around the periphery of my head in quick staccato movements, then grasped the sides of my head with both hands and squeezed my head firmly as he rotated it, like a melon!  He scrubbed each section exceedingly hard, then twisted my head and squeezed some more. I do not remember ever having my head squeezed at a salon. My hair is thin as it is, I wondered how much of it I would have left when he finished.

That was when I realized no one else had come in for service. We were alone. Positioned behind a partition about shoulder height, no one could see me, even if they did come in.

He put a hand on each side of my neck and began squeezing, rubbing, and twisting, all the while I could feel the lump of shampoo on my head. This was so far from the head massage I had hoped for, more like a prelude to strangling!

I remained calm; if the stylist was determined to choke the life out of me, I needed to have a defense plan. I decided to make polite conversation in an attempt to dispel any demons he may have been exorcising at the time. How long had he worked there, I asked shakily. Five years, he said. This gave me some comfort; surely, he could not have done anyone in and still be there! I was encouraged. 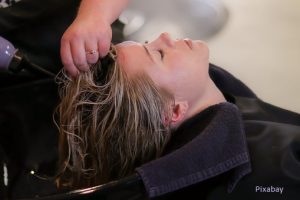 My fears were no more abated than he began pushing my head down in the stream of hot water, and the head squeezing torture began again. My body was actually coming out of the chair as my head dipped further and further into the shampoo bowl! So, he was going to drown me, not choke me. Was that a better way to go?

I looked from side to side for anything I could pick up to slug him with–nothing for at least three feet. I thought of my upbringing, treating everyone with respect even though you do not approve of their methodology. I tried conversation again. Do you have many clients drop in on a typical Wednesday morning? I inquired. He replied, very few. My heart sank as my head did.

I flashed back again to the days Mom washed my hair. I hated these episodes so badly that they purchased a professional salon device that fit over the sink so my waist-long hair could flow back and my neck would not hurt. This made no difference whatsoever; my mother was rough as a Sumo wrestler and every bit as strong, it still felt like she was trying to kill me. At this point, the odd man glared down at me coldly.

His eyes were tiny narrow slits of hollow disregard, his hair close-cropped and severe, he had long Ichabod Crane fingers that wrapped around my head, and thin, very pursed lips. Was he grinding his teeth?? This was decidedly a bad sign; he had taken a dislike to me from the get-go! I was going to die at the Clip & Curl.

I invoked a silent prayer, God, its Karen, you know that matter we discussed this morning? Please cancel that and instead focus on this scary head squeezer.

Not even fifty yards away people were driving right by us, oblivious that just a few doors down a fairly nice, albeit persnickety, sixty-six-year-old was being killed at the Clip & Curl! 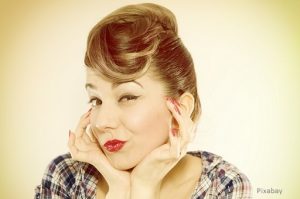 Then, as abruptly as the torment began, it ended, and I was allowed to sit up. The man blew my hair dry in a manner I shall never forget, stopping after each swipe of the dryer to put both the dryer and brush down. This took f-o-r-e-v-e-r, but he never uttered a word.

I did not die of drowning or choking but emerged looking a bit like Ethyl Merman. Wonder if she went to the Clip & Curl too? She did pass on. . .

Let’s all observe a moment of silence for those days your hair was perfect and you ran into absolutely no one. All day long, no one .— Pinterest, unknown author