“If you pick up a starving dog and make him prosperous he will not bite you. This is the principal difference between dog and man.” –Mark Twain

Didn’t get out much did you, Mr. Twain? Recently I risked life and limb rescuing the tiniest Dachshund from traffic during rush hour, no small feat. After, the little ingrate thanked me by biting me on the leg harder than I thought possible, despite his owner’s protests that “He never acts like that.” Critters can be persnickety. 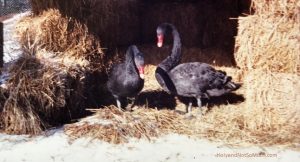 Birds had it out for me from the get-go. Mom had two black swans, Caesar and Cleopatra. Caesar had no use for me, and with a wingspan of six feet, he was intimidating. He charged me routinely, enormous wings spread, serrated beak wide open, lunging for my bottom as I hightailed it toward the fence. The only human Caesar showed a modicum of respect for was my little niece Katy, who sort of scared us all back then.

We lived in the country with dogs, cats, cattle, horses, catfish, turtles, swans, ducks, and for a time, an alligator and one tiny fawn. Our place was also residence to coyotes, skunks, feral cats, Blue Herron, various reptiles, rabbits, squirrels, possums, and the occasional goose. I adore animals of most species, and we had some doozies. 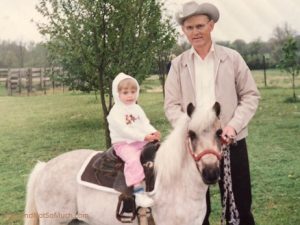 Dad and Jessica with Hissy Fit

Dad bought a Shetland pony for the grands, Hissy Fit, aptly named for my niece, Jessica. When he kept the pony at his Veterinary clinic, she stood over the burning clinic waste and snorted the smoke. She’d have most likely been a fan of our new cannabis laws.

Over the years my family had about ten breeds of dogs. One Chihuahua, Button, was especially clever and a petite chowhound.

One afternoon we returned home to find Button lying on her side, belly bloated. The five-pound dog had jumped on a barstool, then onto the breakfast bar, and strolled around the kitchen counter to a pan of Linda Coffin’s famous cinnamon rolls. She licked ALL the icing off every roll. You cannot fault the dog’s culinary instinct; Linda’s pastry rocks. 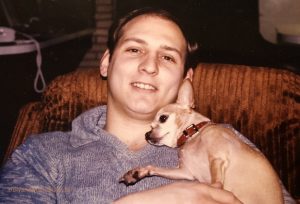 This same pooch disappeared one day. We turned the house upside down, no Button. I walked by a bedroom and noticed my plush robe on the bed; one sleeve was thicker. Two eyes blinked out at me from inside the sleeve; Button was stuck inside the sleeve and could not even wiggle. She was the most laid back small dog I have ever seen. She used to go to work with me when I worked for KATT radio, once she attended an out-of-town sales meeting with me!

One of Mark’s boxers was shot by a neighbor, another was stolen. The most emaciated dog I had ever seen appeared on the patio one afternoon. It was Major, who had disappeared three months earlier. A wide circle around his neck exposed raw pink flesh; the pads on his feet were pink and bleeding. That magnificent dog endured terrible treatment and traveled many miles to get back to us. Dogs are just better people than we are. 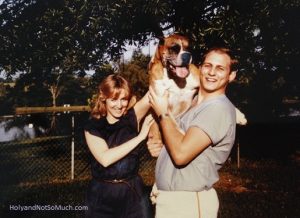 Mark, Me and a healthy Major

Georgia, our athletic Chihuahua, darted onto the highway. As I raced to snatch her out of the road, an eighteen-wheeler (that never slowed down) came barreling down the hill and missed her by about a foot as I looked on in horror. She was fine, I required wine resuscitation afterward.

Hootie, my Maine Coon cat, loved dogs, felines, not-so-much. If another cat came into the yard, a fight ensued. My friend Leighanna went to the Veterinary clinic to pick him up one day and found him seated between a huge hound and a massive St Bernard, just chillin.

That Veterinarian used to let him roam the clinic and visit guests. One day when I arrived, he was caged. They told me he had been grounded for having his way with a forty-pound bag of cat chow. Hootie claimed one-pound Marley as his own and watched over her. He let that puppy pull all the hair out of his tail. A huge fur-ball with a bald tail. 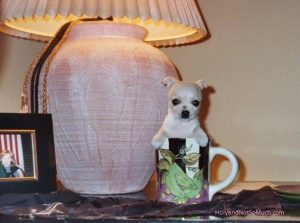 Marley, Pup in a Cup 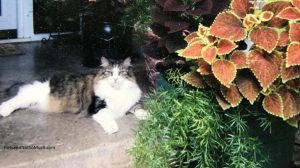 Hootie Katt, master of the house

On a sweltering August day, he was gone all day. I must have gone to one-hundred homes with flyers. At the last house, I asked them to open the door to their metal shed; out sauntered Hootie. It was one-hundred-five degrees that day.

He roved the neighborhood regularly; everyone knew Hootie. When my neighbor Wayne passed, there was a picture of him and Hootie at his service.

When Hootie met my ex he attached himself to the man’s face straightaway, claws exposed…you gotta love a creature with great intuition.

There were also adventures with non-domestic critters. One summer we emptied the pool to paint it. I noticed something stirring in a pile of leaves on the bottom. It was a possum, panting very hard. I thought she was in labor and soon a baby possum climbed up into the pouch and confirmed my suspicion. Animal control arrived and took the new mom to a truck for relocation while a gaggle of kids gathered. Birds, bees, and possums 101. 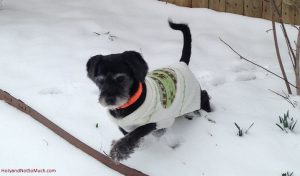 Gusser, romping in the snow

The first cold day of fall last year Gus was sprayed by a skunk and promptly ran through the house. The poor dog was given so many baths; he is afraid of the bathroom. The windows had to be open so the house could begin to air out; it was 40 degrees. Good times.

I missed work the next day because I too smelled like skunk. The second day, more baths for both of us and home deodorizer. I was so stressed, I backed through the garage door, missed work again. I rented traps to relocate the smelly creature and caught two possums, a squirrel, a darling raccoon, and one most unhappy cat. All were set free if a bit pissed off.

Evidently, rodents are not fans of winter because they prefer my home. I had one in the luggage closet, most of which I threw out because it was fouled beyond repair. The last bag I checked was my favorite multi-pocket duffle. I unzipped each pocket to find the perpetrator. The last zipper revealed the chubbiest mouse I have ever seen, pregnant, making a nest, and staring right up at me.

I put the duffle in the outside trash bin and felt remorse because I knew the compacting trash truck would squish the mother-to-be. So, I took the duffle and expectant mom to a wooded area, unzipped her duffle door and left her there with her very own condo. Go ahead, say it, I’m a tender-hearted sucker.

All his life he tried to be a good person. Many times, however, he failed.
For after all, he was only human. He wasn’t a dog.”
― Charles M. Schulz