“I want to take all our best moments, put them in a jar, and take them out like cookies and savor each one of them forever.” ― Crystal Woods, Write Like No One Is Reading

I moved recently, and learned some things about myself. One of them is that I am exceedingly and rather pathetically sentimental. I found items preserved for years that reasonable adults do not to cling to.

I have two jewelry boxes, not because I have marvelous jewelry, but because they are both filled with small treasures.  The content, bits and pieces of my life.

I found name badges from jobs gone by; there were many. What do I think I can do with these?

Actually, one did come in handy on a date with a memory challenged bucket head who kept calling me Linda. I went to my car and retrieved one of them, put it on, went back into the restaurant, pointed to my name, Karen, and asked him if he thought he could just read it. Again, boy can I pick em!

There were three large copper colored sequins at the bottom of one box. These were tossed onto me by Bernadette Peters at her concert with the OKC philharmonic. To date, they have imparted no more musical talent than I had before.

Enormous peach colored, dangling, ball earrings were way back in the corner of the larger box. Dad chose these for my birthday all by himself when I was about fourteen. I also found a blue western blouse in the closet he helped me buy for a rodeo when I was in the eighth grade. The man would rather take a poke in the eye with a sharp stick than shop for or with a woman. But, do I really need to cart these around for 40 more years? 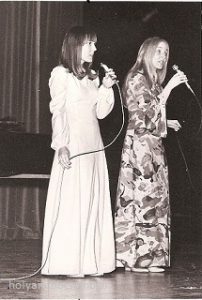 In that same closet I found a long, glittered, wildly patterned, purple dress I wore in 1972 when Kelly and I were chosen as a duo for the Varsity Revue at Oklahoma State University. I thought I’d wear it to my church’s annual Mardi Gras fund raiser.

I could get it on it on but I could not breathe-much.  I could not bend-at all. I wore stretch pants and a top.

Two little lapel pins that say “Never too Old to Rock and Roll” were in the bottom drawer along with an old ticket stub from a Kenny Loggins concert, circa 1985, marked $8.50. Under the lapel pins was a check made out on my account for one million bucks and signed by Kenny, right after he kissed me. Backstage passes-those were the days!

An extra large, very brittle, medication capsule Dad used for horses when he was in practice rolled out from the back. Really? There was a champagne stained Golden West Broadcasting bookmark signed by Gene Autry dated November 5th 1980, and a worn out “Winnie the Pooh” watch.

So many things I should have let go of years ago, like the three tiny pink buttons from my Aunt Alma’s nightgown that I wore for years. They are what is left of it.

And, evidently I am a Christmas card hoarder. Who knew? You could wallpaper the louvre with the cards I found! To my credit, I kept lovely ones. Maybe I’ll find something creative to do with all of them one day. . .

Three cat eye marbles rolled out of a tiny marble bag. Dad sewed Mark and I these bags himself to hold our marbles when we were kids. I can’t just toss those can I?

Examination of a crumpled, very old cocktail napkin with a really nice ink sketch on it revealed a little note on the backside that said “Someday, when I get a job, will you marry me?”  I did not.  I suspect this was kept for the ink sketch.

There was also a Christmas list sent to me by my niece Katy when she was about nine. On it, her hearts desires. At the bottom she closed with “I love you more than life itself”.

There were a couple treasured cassettes from my singing days, recorded with Howard, the singing partner of my youth. “Make the World Go Away. . .” I wonder if I even have a device to play them on now. 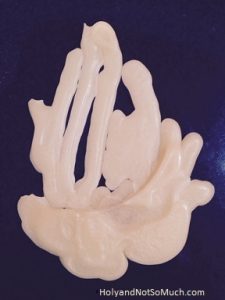 Why do in the Lord’s world do we keep these things? Because, they give witness to our lives. It really happened. I still miss her. We were all there. It was a beautiful trip. I wish I could do that again!  I was in love then. My Mom was proud so of that!  That was so much fun. . .

Think back. What are you silly sentimental about? What did you keep?

“Sentimental blackmailing is the melodrama done by heart over our brain.” -Upasana Banerjee