Our first years as a family were fairly idyllic in small town South Dakota, Wakonda, population 405. Wakonda is an Osage Indian word meaning “Great Creator”, an abstract, omnipresent spirit. Curious that my awareness of and seeking of God began when we lived in Wakonda. 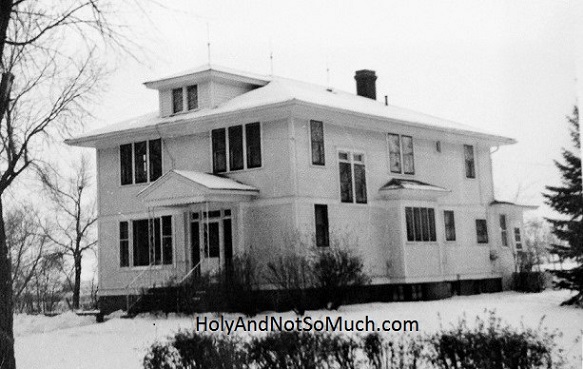 My folk’s first home was actually their dream home; they paid much less for it than you would a used car now.  It was on a corner two acre lot with cherry trees, apple trees and crab-apple trees. This place was an absolute marvel for a kid!

The front stairwell was carpeted for ancient twenty-seven-year-olds, but the back stairs were plastic coated, and all ours! If you pushed off from the top step you could s-l-i-d-e all the way down on your butt.

The above picture was most likely from spring. Had it been winter, you would see none of the bushes, and the front porch would also be obscured, by foot-after-foot of icy, cold, ever accumulating, snow. It was South Dakota. I remember looking out the window thinking “Wasn’t our car in the driveway when I went to bed? “ 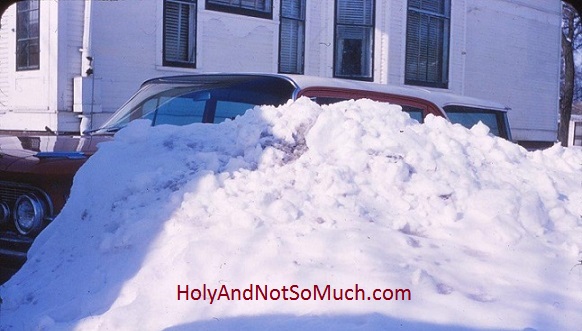 The upstairs bathroom had a big wide black vinyl floor, aka skating rink. Jan and I filled the tub, tossed most of the water on the floor, and pushed each other’s skinny, naked, bottoms across, or planted our feet against the wall and took off, doing wheelies as we giggled in glee! “Pushy and Pully” is what we christened this wild ride; we loved it!  Mom, not so much.

That bathroom had a curious little door which was a laundry chute. We tossed our dirty laundry down and it landed in a basket, right by the washer in the basement. This was nifty enough until my little brother, Mark, tried to throw the dog down it and follow suit with his body. Dad nailed it shut.

Life had its difficulties in Wakonda, like the weather. It began snowing in October and did not stop until April. In the movie, “A Christmas Story”, there is a scene where a kid is so bundled up in his snow suit that when he falls down he cannot get back up.  He just rolls around on the ground, like the Pillsbury doughboy. That was me.

The weather was grueling for Dad, who braved sub-zero temperatures to treat livestock for clients. He detested the cold. Can you imagine doing surgery outside in some farmer Brown’s stable in the icy wind when it is ten degrees below zero? But, he was the only Veterinarian for miles around that rural area, and the man loved his family. They most certainly do not make em like that anymore! Thanks Daddy, love you.

If the weather was not severe, Dad would let me come along on country calls with him. I would sit right beside him atop his medical bag and shoot pheasants out the window with my finger. One of the things that made county calls delightful was the country cooks, who would without fail invite us in for pastry and coffee. Scandinavians are damn serious about their pastry! A few too many pastries could be why my third grade beau named me “Pudger”.

The bitter cold could be also be challenging as you walked to school. The high school boys thought it was big fun to push us over and roll us in the snow. The coldest I have even been was after one of these episodes, with completely numb legs, feet, and hands. When your limbs begin to come back around they ache and sting like crazy.

My sister Jan and I attended a very small school in Wakonda; first graders through seniors were in the same school building. Usually this made for all kinds of fun you don’t see today. Back then we experienced childhood in a protective Wakonda bubble-early childhood as it should be. 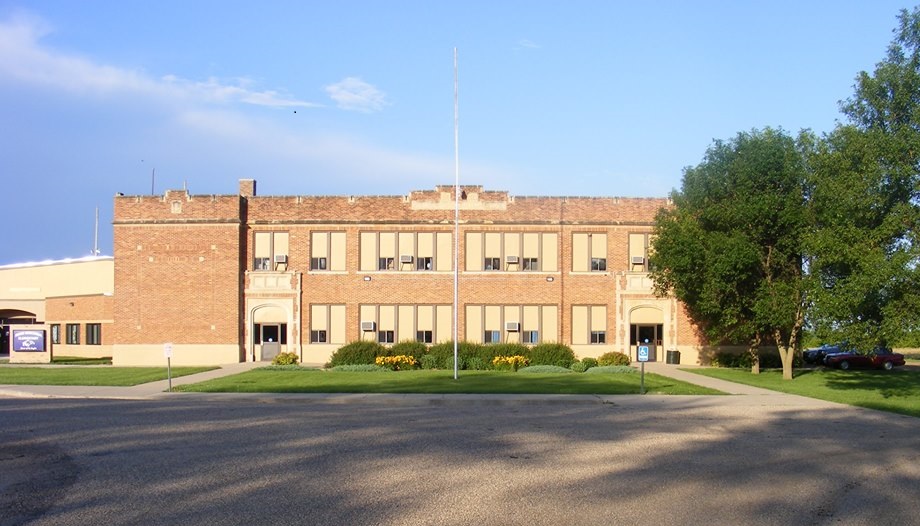 The high school boys pushed our swings for us on the play-ground. Those swings were actually taller than most and the teenagers could swing us quite high. It was one of my favorite things. Had they known, we’d have seen a parental melt down!

I would close my eyes and lean my head way way back. It made you high as a kite. I loved it, who wouldn’t?  One day I was so giddy with the “swinging highs” that I slipped out the back of the swing and landed hard on the ground below on my back.  It totally knocked the wind out of me. I looked up to see kids gathered around and my big sis pushing her way through the crowd.

Jan is four years older than I am (Don’t you forget it sister!) and looked out for me. She came by Mrs. Hart’s first grade classroom to walk her five year old sister home.  One day Mrs. Hart pulled out a big over-sized “Dick and Jane” reader, placed it on an easel, and turned the pages as I read to show Jan what I had learned. That was the first time I remember feeling something like pride. Mrs. Hart took an apple, broke it in half with her hands, and gave me half; she did this routinely. I still don’t know how.

Small town life, circa 1958, and the tiny school, had its advantages; Jan brought her horse to school for show and tell one day. Can you imagine that happening now? Anywhere?  Even at seven years, I rode my horse Dolly all over town, anywhere I wanted to go, over to the drug store, to the schoolhouse, or to the grocery store to see my fine little beau, Craig Christensen.  He ran us into a tree right after this picture was taken, but I did get my first kiss after. Thinking back, that may have been the first signal to me that men were bad ju ju! 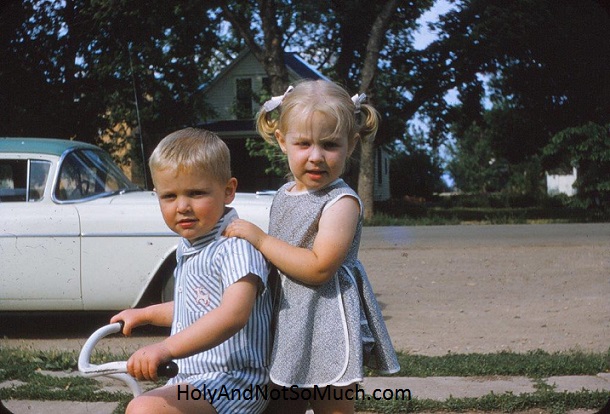 One evening my bestie, Rose Anne, and I rode our bikes up to the stadium.  We were forbidden to climb the stadium steps. Of course we did.  When we were at the top, I fell-again. Onto by back-again. Knocked the wind out of me-again.  It’s no wonder my back is jacked up now!  We took an oath never to divulge this secret for fear of parental retribution.

We even had a murder mystery in Wakonda.  Someone in town poisoned a number of family pets with strychnine.  Dad saved all of them he could; two of ours were not so lucky. We never knew with certainty who the perpetrator was, but the evidence pointed to someone close to our family, our babysitter! She was crazy mean; our parents thought we were just whiny kids until the evidence began to mount. So glad I never ate her pastry!

Yes, Wakonda did lack population, restaurants, kindergarten, shopping, a hospital, warm weather, a reputable babysitter, and countless other things, but we had something no other town could boast.  We had Janet Hesla.

Janet Hesla was Aphrodite of the frozen Tundra. When she passed, this second grader stood silent in gaped mouth awe. A tall blonde Danish snow Goddess in a tight skirt and sweater, bobby socks, and pony tail; the Holy Grail of womanhood. Janet Hesla had a smile that made high school boys forget their names and a little girl dream with every fiber of her chubby little being that she could be just like her.

Now, a good seventy percent of the town’s population had blond hair and blue eyes, this was Danish, Swedish country.  But–there was something dazzling about Janet Hesla, something regal.

Janet had a slew of brothers and sisters as charming as she; her brother Stevie kissed Jan one day. Were they under a car??? It was someplace strange, second grade memories are a tad foggy.

Out in the tundra, we made good friends, the people were lovely, and any occasion to celebrate was welcomed. These folks could whip up a big parade at the drop of a hat. One day junior class officers came into our second grade class to choose someone to ride on their homecoming float; Janet Hesla was class spokeswoman.  She announced they had chosen me! My life was golden; chosen by the blonde Goddess!

Most kids declare at some point that they are parting company, hitting the bricks, going on the lamb, making a getaway from home. I actually did it in the second grade, in the dark, in below zero weather.

I walked two blocks in the dark; snuck right out the front door without being missed, to my best friend’s house.  Her mom answered the door, “Well, we weren’t expecting you, how did you get here?”  “Mom brought me”, I lied. “Your cheeks are very rosy.” she questioned. “Well, it’s cold outside” I reasoned. I was lucky I even made it there, with all the underwear I owned in one plastic bag and four school dresses crammed in the other. (I planned to stay a while.) 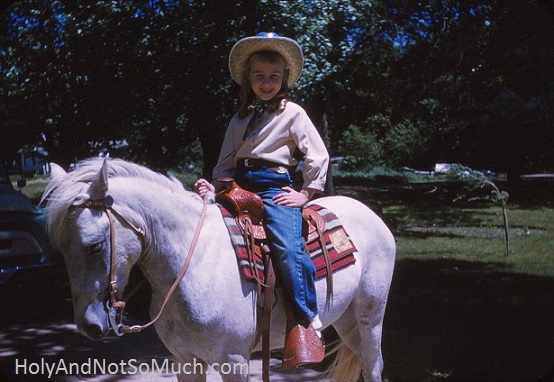 This did not meet with the sweet homecoming I imagined. The experience changed me, at that tender age. I was an oddly spiritual little munchkin even then, and I remember deciding that from then on I would talk to God, and make good friends who might understand me better. And, who knew, when I was older little “Pudger “might transform into a Janet Hesla like Snow Goddess!

“My old grandmother always used to say, summer friends will melt away like summer snows, but winter friends are friends forever.” ― George R.R. Martin, A Feast for Crows