Mary and the Teeth Gnashers

“It seems to me that if there is a bad taste in your mouth, you should spit it out. You don’t constantly swallow it back.”  Amazing Grace, Michael Apted, 2006

Hours on end we sat on those hard pews looking up at the minister.  We listened, my girlfriends and I.  Week after week we learned and prayed and wondered why.  And, why not?

So few examples to look to, to emulate. Women were revered because they were obedient and docile. From the bible, it seems the only way for a woman to redeem herself as worthy was to give birth multiple times and preferably to male children. 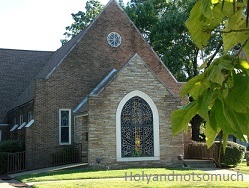 I am grateful for the bible stories that do tell other stories of women.  We see the perseverance and divine insight of Anna, the faith of Mary Magdalene which lead to healing of her chronic illness, Pilot’s wife warning her husband of her powerful dream about Jesus, “this innocent man”(which he ignored).  The story of Priscilla was encouraging, as she was chosen by Paul to shepherd a church he left behind, and Miriam who questioned authority and helped Moses lead the Hebrew people to the Promised Land.

There were too few of these stories and unless you excavated them, you never even heard them.

It’s sad when you remember where value was placed when many of us were girls. It was accepted as just the way things were. Girls grew up understanding their worth, and later as adults hid the hurt because mentioning it brought on not just opposition, but wrath. Not only from men, but sadly from other women.

When I think of God now I do not usually visualize the masculine or the feminine, but sometimes I visualize both. As a girl, I was taught that God was masculine, and sitting on a throne in strict judgement of all I did. We do need an image of God for understanding, one we can be in relationship with-not a complete abstraction. I get that. And I understand the Book was a product of the time, a very patriarchal culture. But I was never even served communion by a woman until I was in my thirties. This is what God intended?  Really?

Female ministers were unheard of until I was in my late thirties. When we were seeking female spiritual mentors we found them because we were hungry and very observant, but they were sitting in the back pews.  I wondered why we didn’t have someone like Mrs. Grant leading the service-calm, steeped in experience, wise beyond her years, and most of all, loving and non-judgmental.  What a mentor she was to me.

I know, the Deacons are “tearing their clothes and gnashing their teeth” right now. What is up with that tearing and gnashing anyway?  I will most likely be flogged for going down this path, but if we don’t tell our stories whom can young women depend on? 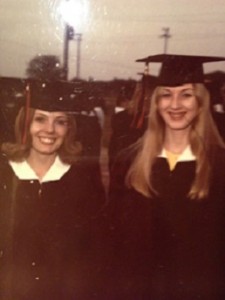 The exclusive male spiritual imagery did something to my soul as it negated the divine feminine.  Even as a child I was serious enough about my spiritual life to notice. In my eyes they could not make me absent or weak by painting the other predominant and strong. And, how do we aspire to something if we don’t know it exists?

These words are old news to most of you, but so sadly, still never thought of by others. To keep the fire going it takes candor.  It is disrespectful not to shine light on this issue, especially to those who worked so hard to get the conversation started and were made to suffer for it.

When we were kids, the minister would talk about Mary at Christmastime, the rest of the time we didn’t hear much about her and when we did it was primarily about her obedience to God. We did not hear much about her as sister, wife, Holy, loving, constant, and incredibly strong. How I loved Mary as a girl.  Still do, and have spoken to her for years.

I changed church affiliation, in part, because of this gender issue, as have friends and mentors. This was not turning my back on how I was raised, or running away from what I was uncomfortable with, but walking toward my own deep spirituality.  I now have an opportunity to interact with female priests and deacons, female lay ministers, female communion servers, scripture readers, and our senior warden is female. The young girls who attend hear stories of women who made a difference 2000 years ago and women who do now. They are asked to participate, and they learn that their service is valued and needed. It is a matter of dignity. 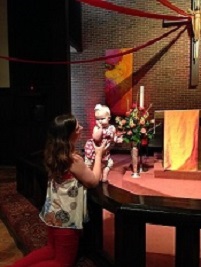 When I find myself in times of trouble
Mother Mary comes to me
Speaking words of wisdom, let it be

And in my hour of darkness
She is standing right in front of me
Speaking words of wisdom, let it be

Beatles. “Let It Be”

Places of worship should not only concern themselves with growing, but also with maturing as organizations. Honoring both the male and the female divinity is one step closer to maturity.

God loves me, and loved the chubby little blond headed girl who sat and listened, tried to understand, and felt less than. My spirituality is now grounded in a divine that includes the feminine and does not need the validation of patriarchy, or the church.

I think of Paul McCartney’s lyrics, “I give her all my love, that’s all I do.  And if you saw my love-you’d love her too.  And I love her.”  That’s how God loves me.  In fact, I think God is disappointed in the way things have been represented too. But, things are changing; Mary and I are smiling more often.  Now, let the teeth gnashing begin!

“Women are still in emotional bondage as long as we need to worry that we might have to make a choice between being heard and being loved.”—-Marianne Williamson, A Woman’s Worth”